The Bunkhouse Blog: An Old Cowboy

The Bunkhouse Blog: An Old Cowboy: Memories (c) The rocker's legs creaked against the wooden porch floor While the old man pondered of days gone by sittin' near...
Posted by Unknown at 1:41 AM 1 comment:

The rocker's legs creaked against the wooden porch floor
While the old man pondered of days gone by sittin' near the open door.

His dusty saddle, rope and worn out spurs were hung up long ago.
He no longer rode. He could barely walk. He was bent and movin' slow.

His wrinkles lifted upward from a smile and he had a twinkle in his eye
Thinkin' about ropin' and ridin' in days gone by.

He heard the campfire pop and the coyote sing.
He saw a million stars and felt the wind do its thing.

He appeared to be talkin' to his creator, though not a word was said.
It was his way of prayin' with thoughts there in his head.

The radio inside was playing his favorite tune. It was "Amazing Grace."
The old man rocked one final time and died with a smile on his face.

I wrote "Memories" as a tribute to people everywhere who have the opportunity to say good-bye to themselves before they die.
Posted by Unknown at 1:37 AM 1 comment:

The Bunkhouse Blog: John Deere Corn Picker: "Trixie" Bumps Her Head I know each of you has done this before. It's where you say something out of line and wish right aw...
Posted by Unknown at 3:02 AM 1 comment:

The Bunkhouse Blog: John Deere Corn Picker: "Trixie" Bumps Her Head I know each of you has done this before. It's where you say something out of line and wish right aw...
Posted by Unknown at 3:46 PM 16 comments:

I know each of you has done this before. It's where you say something out of line and wish right away you could take it back! That dern thing happened to me this weekend.

"Trixie" was down on all fours cleaning the oven with them yellow gloves and that stuff that stunk up the whole house. She looked liked she was part of those police units when they decontaminate a house making meth. She had on a hood, a plastic gown, and was using my C-PAP Breathing machine from my side of the bed!

I poured my fresh coffee into my official cup from NASCAR (Non-Athletic Sport Centered Around Rednecks)!  I lifted my legs real high to step over her behind! I said out loud, "Trixie, your rump is gettin' bigger than a six row John Deere Corn Picker!"

Well as soon as I said it, she sprang up, hittin' her little head on the top of the oven where that 'figure eight burner' is located. She didn't mind the blood running into her mask, but oh my, she was ticked! I sure did wish I could take that back!

I continued 'supervising' that oven cleaning business from my chair while finishing up my coffee. Things weren't all bad as I had thought, because I already had the bucket, hose, soap, sponge, and rags out by the truck. I knew when she was finished here she would fer certain want to wash my truck!

Later that night I was still feeling kinda low, you know with a dirty pick-up and all! So I snuggled over to her and was wantin' to make it up. I pulled her in real close.

She said, "Hold it right there, Cowboy! Don't think for a minute I'm starting up this two million dollar piece of machinery for one thing little ear of corn, do you?" 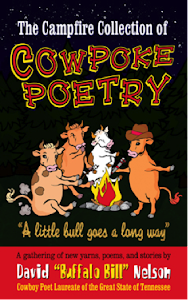 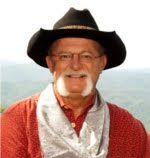